Most Transparent MDAs and Local Governments to get incentives starting October 2020! 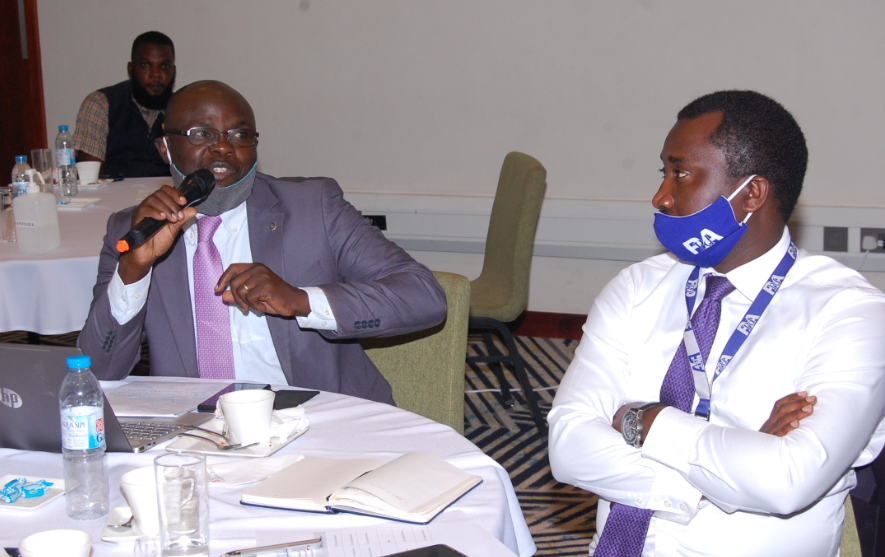 Government committed to scale up the CoST Uganda’s Infrastructure Transparency awards to recognize the most Transparent Ministries, Departments and Agencies (MDAs) and Local Governments (LGs) starting October 2020 at the annual Procurement Forum by PPDA. The October 2020 Award process was committed upon by the Ministry of Finance, Planning and Economic Development (MoFPED) and the Public Procurement and Disposal of Public Assets Authority (PPDA) during the recent project review meeting for the Fair Business Practices between Government and the Private Sector in Uganda being implemented by CoST Uganda. CoST Uganda has been running an Infrastructure Transparency award process for journalists, and Procurement Entities since 2018 under its Assurance process, this award has previously been given to entities that embrace the initiative’s Assurance process and acts on recommendations. This process is now being institutionalized as a Government incentive for Procurement Entities in various categories to embrace transparency in the delivery of public infrastructure projects. Entities are called upon to gear up to this great moment to shine!

The Fair business practices agenda has become a hot debate across the country. A number of stakeholders have picked interest and joined the discussions, interestingly, the private sector stakeholders who had been silent for quite a long time are now appreciating the Business Integrity Initiative. Since the release of the Government Procurement Portal (GPP) data analysis report in June 2020 by CoST Uganda, which revealed low levels of proactive disclosure at 49%, the talk on fair business practices caught fire and has seen a number of stakeholders including Government Agencies showing the willingness, and interest to address the private sector concerns on procurement. MDAs have appreciated that disclosure influences competition and leads to fairness, thus leading to value for money and quality infrastructure.

Information disclosure has been the major focus of the Business Integrity Initiative project since the onset. The engagements in the last six months have actually revealed that one of the key issues affecting the private sector from engaging in infrastructure procurement processes is lack of information before engaging in and after engaging in public infrastructure procurement processes. Data disclosed is not consistent with the CoST Infrastructure Data Standard and thus not easy to categorize or analyze. Of the data retrieved from the period January 2018 to January 2020, proactive disclosure was very low at 49% moreover projects analyzed had both cost (86%) and time overruns (98%) while 51% of contracts awarded had lower than 3 bids meaning that there are unknown factors limiting the participation of private sector in procurement. 99% of the contract awarded were won by local providers – there was no data verifying which of the 99% are local – local firms owned by Ugandans and which ones are local resident firms owned by non-Ugandans whereas  majority of the projects delayed for 3-6 months (25% delayed). Engagements with the lead professional associations for the contractors and consultants revealed that some of the factors affecting the private sector from engaging in procurement include; high qualification requirements and the failure for Government to operationalize the reservation schemes and the local content policy.

However, there is a ray of hope, PDEs are beginning to appreciate the value of opening up infrastructure data to address mistrust and open up markets. Government officials made pledges and commitments on how to address the issues of non-disclosure by PEs for instance; strengthening PE officials’ capacity in uploading data on the GPP, enabling disclosure at all project phases and engagements with public officials on attitude change. In addition, to enhance performance of infrastructure projects, the oversight bodies such as MoFPED and MoFinance agreed to strengthen enforcement of contract management procedures, working upon payment terms to ensure that contractors are paid in time to avoid delays in project completion. For Local Governments, MoFPED committed to work upon the factors that affect them in retaining funds for planned and ongoing projects at the end of the financial years by putting in place special accounts for such funds; with strict conditions.

The presentations on project interventions highlighted some of  the key achievements such as; commissioned assurance on 10 projects under UNRA (4 projects), Ministry of Works and Transport (3 projects) and Kampala Capital City Authority (3 projects) as part of the 4th assurance process, analysed the GPP-infrastructure procurement data against 5 key indicators of; proactive disclosure, cost overruns, time overruns, tender management and transparency in procurement and project delivery, conducted disclosure sessions with 51 procurement entity officials on using the OC4IDS, the IDS and E-IMT, held engagements with lead private sector associations (UNABCEC and UACE), conducted 2 trainings for 71 journalists on investigative infrastructure procurement transparency reporting, data journalism, ethics and the public infrastructure procurement processes among others. 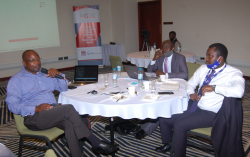 Dr. Levi Kabagambe, Board Member -PPDA at the learning event

From the interventions so far made on the project, we have noted increased transparency amongst the procurement entities – through an increasing level of disclosure verified through the Assurance Process, most PEs are above 40% in proactive disclosure, this is promising and we encourage PEs to embrace full disclosure to 100%. We also contributed to reforms on emergency procurement where seven recommendations submitted to PPDA on emergency procurement guidelines were considered. These will inform transparency and fairness and openness by the PEs to the private sector in engaging in procurement during difficult times. As noted, the Fair Business Practices intervention is getting clout amongst the target beneficiaries, we have observed increased public awareness and joint advocacy for fairness and integrity in public infrastructure procurement.

We believe in progressive action and advocacy for a better infrastructure that is all inclusive in Uganda, resulting from the engagement, some commitments were made and are being followed up; these include;

From this engagement, and as we shall be verifying the results of this intervention, we are slowly progressing; we have establishment a platform for the key actors in infrastructure procurement processes to engage; and this causes for the need to sustain this platform. There was a concern from the Ministry of Local Government and Wakiso District as well as the private sector that the intervention is majorly focused at the Central Government level leaving aside the Local Governments, partly this because of the inadequate resources that would not enable the intervention to reach to more entities/stakeholders; however, this pauses a need that still exists and the value the intervention has had in the sector. We call upon our stakeholders to share the message of fair business and let us all be agents/champions of the same. We also invite our development partners to invest more in such interventions that are aimed at opening up markets for everyone, through the trust and ethical building process.

In the words of Dr. Levi Kabagambe, a Director on PPDA’s Board and a Procurement Expert, the introduction of the E-GP (Electronic Government Procurement) is hoped to be the successor technology for public procurement – infrastructure procurement inclusive; “Disclosure is a function of many things, if PDEs do not disclose data, citizens participation will be affected, and we will not realize an open market for all firms to engage with fairness and integrity, transparency and accountability may not be realized as well. When E-GP is fully functional, issues of disclosure will be history” said Dr. Levi.  It is from this statement that we continue to call upon Government to fully disclose infrastructure data aligned to international standards such as OC4IDS (Open Contracting for Infrastructure Data Standard) that enables stakeholders to easily engage with and interpret.

Openness is the way to go to realize transparency in infrastructure procurement. We need to see all PEs publishing what they planned, procured and implemented. 69.8% of the stakeholders in Uganda agree that corruption influences Procurement according to the IGG report (2012). In addition, the IGG Report reveals that corrupt payments in procurement at in Government amounts to 9.4% of the total value of contracts. Corruption is influenced by lack of ethics and integrity. Lack of ethics and integrity in Public Infrastructure procurement affects competition and Fair Business practices and this puts the citizens to risk resulting from poorly constructed infrastructure. It is important that Government through PPDA and DEI – Directorate for Ethics and Integrity strengthens Contract Procurement Management, ethics and integrity and mindset change to minimize risks to corruption.