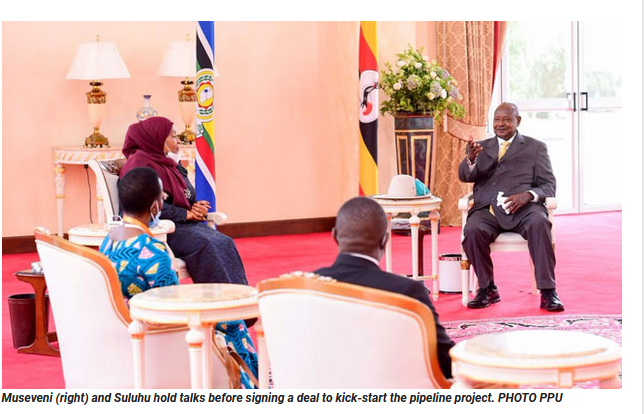 Transparency, accountability, stakeholder engagement and compliance with Environmental, Social, Health and Safety Safeguards have been pointed out as the silent issues, in the most recent agreements for the upcoming Crude Oil pipeline project. Uganda and Tanzania signed two agreements relating to the Crude Oil Pipe Line on 11th April, 2021 at State House, Entebbe. The signing of the two Host Government Agreement, Share Holder Agreement (for the pipeline company) and Tariff agreements was witnessed by the respective country heads of states, President Yoweri Museveni and his Tanzanian counterpart Her Excellency Samia Suluhu Hassan. Present at the occasion were the Partners in the pipeline agreement Total and China National Offshore Oil Corporation.

The signing of the agreements for the over USD 10 Billion paves way for the construction of the 1,440 km crude oil pipeline from Uganda’s Albertine region to the Tanzanian seaport of Tanga, which is expected to last a period of 4 years. This will be the longest electrically heated pipeline in the world. It is heated because of the waxy nature of Uganda’s oil. Uganda has so far discovered over 6.5 billion barrels of oil.

Both Uganda and Tanzania are members of CoST –the Infrastructure Transparency Initiative, this is an opportunity for the two member states to adopt the CoST approach to Disclosure, Assurance, Multi-Stakeholder working and Social Accountability in the delivery of this very amazing project.

Tanzanian President Hassan after witnessing the signing said the project would not only benefit Uganda and Tanzania alone but the entire region. “The project will bring revenues to the regional countries and more than 10,000 jobs will be created,” she said. “EACOP will unlock the regional potential and attract more investors to east Africa.” Our region is well-endowed with abundant resources. In order to fully and effectively exploit these resources, we need infrastructure” she added. Ugandan President Museveni said the pipeline will transport 230,000 barrels per day and therefore South Sudan and the Democratic Republic of the Congo could take advantage and use the facility. “This pipeline could turn out to be a very important project that could serve the entire region in the long term. We could build a return pipeline to carry gas from Tanzania to Uganda and the entire region,” Museveni added.

As many have noted, this is an amazing project geared at boosting economic development across East Africa, and beyond. However, it is likely to turn the other way round, if some of the salient but silent issues of transparency, accountability and fair business practices are not considered right from the onset.

The infrastructure sector is complex, and can also be challenging for a local person to comprehend, and more so, the oil and gas sector. It is therefore, very critical that, both Governments consider the silent but salient issues of transparency, accountability, stakeholder engagement and compliance with Environmental, Social, Health and Safety Safeguards. It was commendable for the signing of the agreements to be made public, this is partly the openness we champion, however, it is our plea that, the other important phases of the project including how the contractors, consultants of the project were or are to be procured, the implementation processes be made open.

Both countries in 2019 at the East African Procurement Forum in Arusha Tanzania represented by their respective Public Procurement and Disposal Authority entities, committed themselves to enhance and embrace public contracting, it is in such high cost but critical projects that this commitment should be tested and implemented. Public contracting is when the process of identifying service providers, contractors, project supervisors and material suppliers is made open to all stakeholders, especially the private sector to engage, such actions contribute to fair business practices, integrity in procurement and lead to the reduction of possible corruption risks, mismanagement, and inefficiencies in public infrastructure projects.

Whereas both Governments agreed to the project, there is need to walk the talk towards the realization of commitments made by Governments to international frameworks and initiatives such as CoST and the EITI. The mentioned project is intended to pass through a litany of communities, of different cultures, norms and development levels, many questions should be lingering in citizens’ minds and need answers which the official signing agreement did not offer. And these may include;

Infrastructure development is critical yes, at this important stage when both countries are thriving towards realizing the sustainable development goals, the salient but silent issues should be paid attention to. As we sign agreements, for critical infrastructure development projects such as the Crude oil project, Uganda and Tanzania ought to re-think the measures towards ensuring transparency, accountability, stakeholder engagement and compliance with Environmental, Social, Health and Safety Safeguards if the upcoming project is to be successful and owned by the affected communities. Some of the key areas to prioritize to realize this include;

Opinion by our Coordinator, Ms. Olive Kabatwairwe, you can follow the live discussions held on 13th April 2021 on @NTV at 1:00pm, via More 👉https://zionly.io/WAOFDlS?utm_medium=social&utm_source=facebook_NTV_Uganda