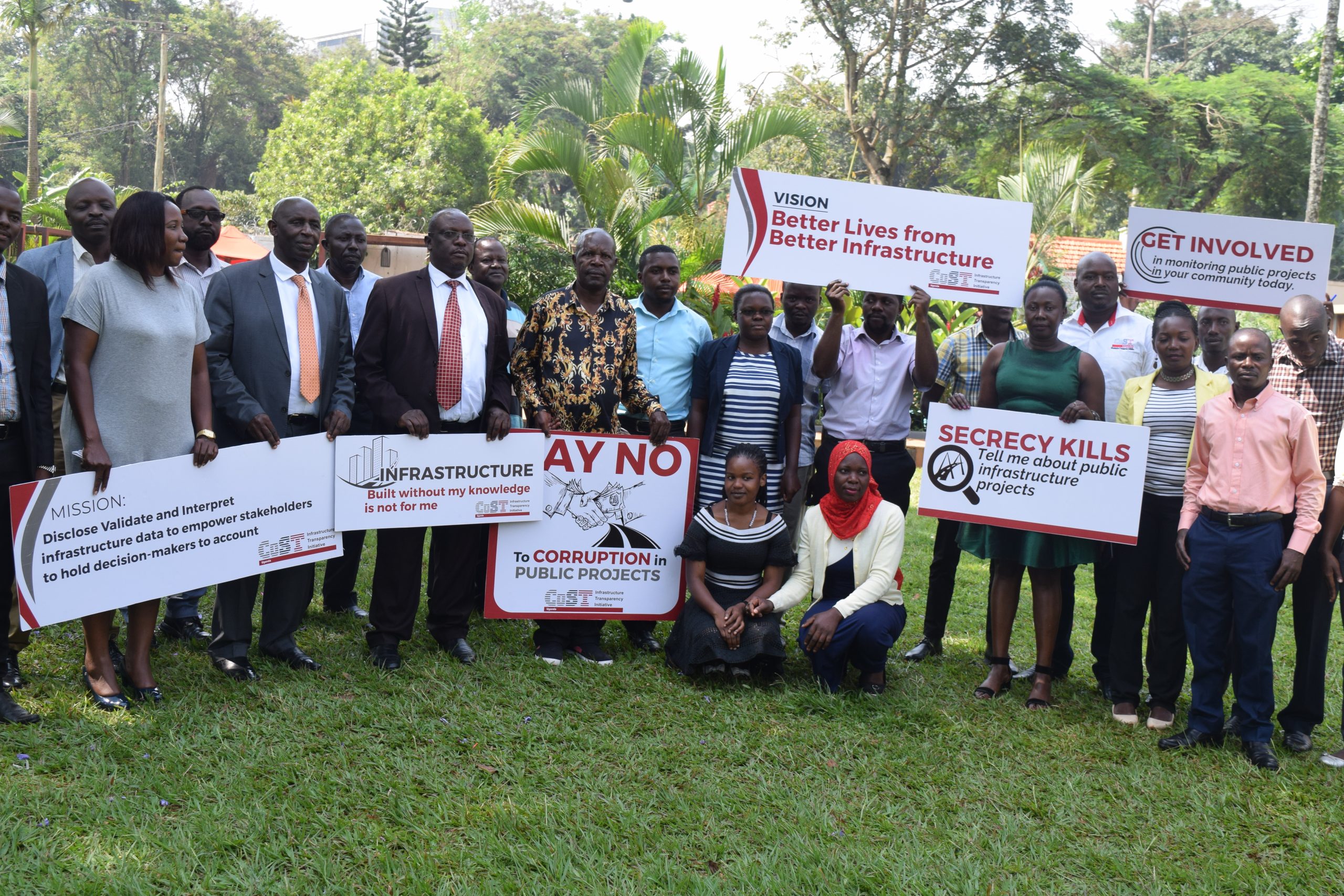 Keywords: Infrastructure I Transparency I Information

Government Ministries, Agencies, and Departments have been urged to embrace online disclosure to enhance transparency. Stakeholders, (Government, Private Sector, Civil Society) made this call during a webinar organized by CoST Uganda under the theme: Infrastructure Transparency during COVID19 and the role of media. Stakeholders also called on each other to consider such engagements that bring ideas to rebuild trust, ownership, and hold duty bearers accountable.

The engagement attracted participants from across the world, Africa, Asia, and the United Kingdom to deliberate on key challenges faced by the media in gathering information and developing stories on infrastructure projects during difficult situations. The conversation came at a time when Uganda is among the countries of the world battling the COVID19 pandemic and is also battling increased water levels of Lake Victoria that have affected many communities around it, floods that have washed away bridges and roads, buildings that are poorly constructed collapsing most often and the increased citizen outcry on the need for sustainable infrastructure.

The conversation moderated by Andrew Kyamagero a senior investigative journalist had speakers from the Ministry of Works and Transport, Ministry of Health, Directorate for Ethics and Integrity, CoST International, Africa Freedom of Information Centre, and the CoST Uganda Multi-Stakeholder Group. You may access the full details here

The discussion pointed out some of the impending factors for journalists and media houses public awareness work to full public satisfaction including, the growing lack of established sources of information, poor reporting and poor relations between the media and Government, poor planning and low interest within the Media houses and lack of attention to the National Construction industry, lack of capacity to investigate, lack of specialization, secrecy in the public infrastructure sector, lack of understanding on the sector, varying interests of the journalists in reporting but also during capacity building events, terminologies in infrastructure procurement and project details among others.

From the Government’s side, the engagement pointed out the challenges Government Communications Officers are facing with disclosing information including; lack of access to the required equipment to support their work, such as tablets, movable laptops, stable internet, templates for disclosing information and a general lack of understanding of the public needs, what information to disclose, when and how. The lack of coordination between the journalists and the Communications officers is one strong challenge the stakeholders agreed to address by establishing good and sustainable relations between the two. Lack of knowledge of who to engage within the MDAs was also another issue affecting timely disclosure and engagement. Additional concerns were on the possible challenges in MDAs’ risk on lack of implementation evidence during audits if MDAs do not exercise transparency and accountability during the lockdown as they deliver infrastructure projects.

A section of some of the participants at the webinar

The Civil Society pointed out their concern on the increased budgets to various sectors and not long ahead, a budget would be allocated for infrastructure recovery, the Ministry of Health has allocated some budget for infrastructure development across the border points, and the same will cut across all sectors in an attempt to address the effects of the floods around the affected communities, it is very important that these funds are publicly managed and accounted for since they are taxpayers money even if they are donations or loans. The issue of disclosure has been coming out largely in CoST Assurance reports in the last 3 years, with many Government MDAs not performing well in proactive disclosure.

The 3rd CoST Uganda Assurance report revealed that proactively only 43% was disclosed and reactively only 42% could be accessed. The overall disclosure level on 13 projects in 2019 was 43%. Low disclosure was attributed to delays in data retrieval and refusal to disclose data by some of the procuring entities. Refusal to disclose was observed from UNRA and Ministry of Energy and Mineral Development delays in disclosure were observed from the Ministry of Education and Sports. Stakeholders are encouraged to note that, disclosing information during a CoST Assurance Process addresses a lot of concerns the public may have on the projects in question, Government MDAs can also recommend projects to a CoST Assurance process. Assurance reports are public documents once approved by the Champion, the Minister of Works and Transport and the Multi-Stakeholder Group of CoST Uganda comprising of the (Government, Private Sector and the Civil Society) and thus, these reports are using by all stakeholders to access information, understand the challenges the MDAs face in procurement, implementation and other project stages, appreciate, own and build trust. Once a journalist accesses an Assurance report, they have a basis for research and development of their story to inform further investigations.

The engagement had major takeaways including;

Some media houses made publications from the engagement such as Shift Media who noted that Government may have challenges in conducting audits if the MDAs do not exercise transparency and accountability during implementation in the lockdown period.  PressUg published calling for transparency in health infrastructure. Many TV and Radio stations published information on actions from this engagement and we continue to call upon all stakeholders to embrace the call for transparency, accountability, and access to information on how infrastructure projects are being managed, procured, and implemented. For any comments or inquiries, please contact us via info@cost.or.ug